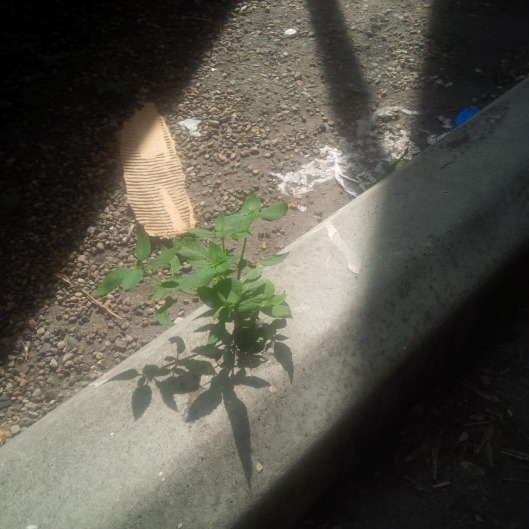 I have seen flowers come in stony places.

Often when we feel as though we are between a rock and a hard place, it is hard for us to imagine that anything good can come from the situation we are in. The weight of what we are going through feels like it will crush us.

I guess one of the benefits of getting older is that we begin to learn that ‘this too, shall pass.’

We remember that we’ve come through desperate circumstances before and although life feels rough and we are looking for a way out of the current darkness, the light will break through eventually.

The human spirit is amazing in its resiliency. It is so much stronger than we give it credit for. It is tenacious in its hunger for life. And just like the plant that found a way in my parking spot by pushing through the cement and reaching for the sunlight in the above photo, we can also find our way.

So the next time you find yourself in a stony place, remember the flowers, and know that you will find your way to the light too.

“There is a crack, a crack in everything. That’s how the light gets in…” ~Leonard Cohen

When a child learns to walk, she may pull herself up on a couch, then walk sideways along the edge moving her right hand, right foot, left hand, left foot and so on, until she gets to the other side.

Or she may push a chair across the room in a mow-the-lawn fashion.

However she takes her first steps, she does not walk perfectly and her efforts only take her so far.

She realizes there’s a crack in her method and one can almost see the wheels turning in her head, with a look of determination as she works out her next move.

Do you remember when your child first walked to you as you waited a few steps away? How (s)he giggled with glee upon reaching you?

When you try something new, taking your first tentative steps, you’ll find cracks in your plan.

Cracks that let in the light and eventually get you where you need to be.

Most things don’t work out perfectly at first.

But don’t mind the cracks.

They let in the light.

I dedicate this post to some of the bravest people I’ve ever known.

Unspeakable horrors happened to you. Your earliest memories expose trusts broken by parents who should have loved you – protected you.

Grown ups who bought and sold you to satisfy their warped desires.

I saw the hurt in your eyes when I begged you to stop telling me. I couldn’t even bear to hear what you had somehow managed to live.

You were just a boy, 10 years old when you left home. You chose a life of prostitution. Somehow you had glamourized that life-style. You thought that you’d make lots of money.

Then you’d go get your brothers – rescue them from your abusive addict of a mother. And raise them on your own and give them a chance for a better future.

You were only 17. You were nervous and ashamed. You were quiet and your eyes seemed so… so dead. I wondered if you were still in there somewhere.

I choked back tears and forced myself to look at the burns and ugly scars that covered your torso.

Yes your pimp let you go but he made sure no one else would want you. I held you until you stopped crying.

You were incarcerated in the east and released in the west – far from home and everything you knew. You were like a possessed man – and seemed to have the physical strength of ten.

You scared me – you scared everyone. The anger and hatred in your eyes was so intense and frightening that I sat paralyzed when you crashed your fist down on my desk.

And then you told me that you were put in jail for beating three men within an inch of their lives.

With tears streaming down your face, you shared how you had tracked them down like animals after they’d brutally raped your sister.

Your mother was an alcoholic. You were born with Foetal Alcohol Syndrome. You made horrible choices. And although you were a full-grown woman you had the emotional maturity of a 12-year-old.

You’d been sexually abused most of your life.

Your teeth were rotting in your mouth.

You’d given birth to three children.

Each time you birthed a child, social services snatched them away from you. Each time they did so you felt as though they’d ripped your heart out. You never even held your babies.

These are all true stories. The stories of people I met while working at a coffee-house that served the homeless. My heart ached for them.

I pleaded with God to give them peace.

There was nothing else I could do

but tell them they had value

that they had what it took to find a way

that I believed in them.

It’s a wonder that they survived

I believe in you

These four simple words have the power to transform. They shine light on the truth of who we are meant to be. When struggles come, when we feel that all is lost, that we just don’t have the strength anymore:

to do the right thing;

These words, when lovingly spoken by someone who cares for us, help us to go on.

Hopefully, we’ve all experienced them in times of need

And they have given us courage when we were afraid.

They have flooded us with light when it’s been too dark to see.

I believe in you doesn’t fix the past, but it’s a place to start.

Is there someone you love who is struggling?

Maybe it’s you who is struggling.

Please don’t give up.

You have what it takes.

I believe in you.