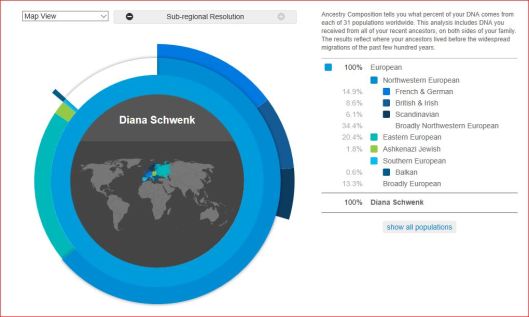 Well I’m 6.1% Scandinavian and that’s where Vikings come from right? I was somewhat expecting this as my paternal grandmother’s family came from Sweden.

As you’ve probably guessed, my DNA results are in!!

There were a few surprises. For instance, I’m only 14.9% German. Well French and German to be exact. I guess I had assumed I would have a larger percentage of German Ancestry because both my parents were born in Berlin, and as far as I know, their parents were born in Germany. When I think about it though, there had to be a lot of interbreeding in Europe, even in the last 1000 years with constant border changes because of wars and such.

Just a few months ago I had told my daughter that I’d read an article that said all blue-eyed people could be traced back to one individual who lived by the Black Sea between Eastern Europe and Western Asia.  And she told me that because I have freckles, I probably have some Irish ancestry.  I dismissed the Irish thing; I mean why would I have Irish roots?

Most fascinating to me was that I am 1.8% Ashkenazi Jewish. In the preceding link, Wikipedia states that among many other interesting facts: The name Ashkenazi derives from the biblical figure of Ashkenaz, the first son of Gomer, son of Khaphet, son of Noah, and a Japhetic patriarch in the Table of Nations (Genesis 10). 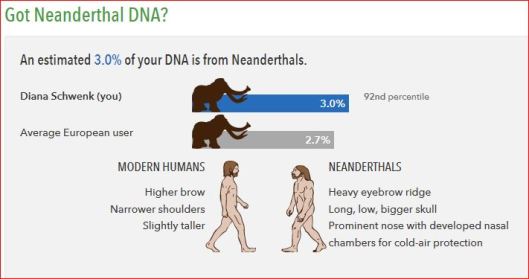 I remember watching a documentary once that suggested Neanderthals carried certain immunities to diseases in Europe that modern humans lacked. Interbreeding played a huge role in ensuring the continuation of modern humans in Europe.

My top relative Surnames (of people who have also had their DNA tested) are Cohen, Kaplan, Goldberg, Friedman and Katz. I’m just going to go ahead and assume I’m distantly related to Leonard Cohen, because I adore him! 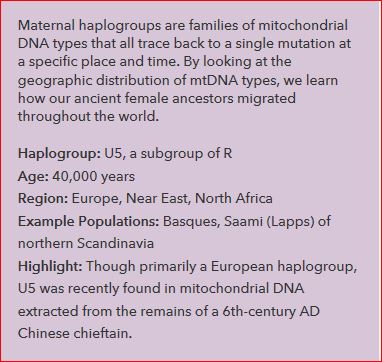 According to 23 and me, I have ancestry in Europe/the Near East in the past few hundred years, that traces back to eastern Africa around 50,000 years ago along my mother’s line.

My daughter, me, my mother, her mother and so on belong to the Haplogroup U5a1B1. The U5 Haplogroup is found in approximately 9% of Europeans.

The U5a1 group originated in Europe during the Ice Age about 20,000 years ago. At the time people were confined to small refuges in the southern part of the continent. When the glaciers began receding about 15,000 years ago people began migrating northward, carrying U5a1 and other haplogroups with them. Today U5a1 is most commonly found in places such as Norway and northern Germany. Other members of the U5a1 haplogroup moved south into the Near East, perhaps in search of a warmer, more hospitable climate than the dry, glaciated tundra of Ice Age Europe. Today their maternal descendants can be found at low levels (less than 2%) in Turkey, Iran and Syria. 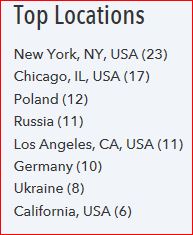 This is all very fascinating to me. 23 and Me shares the profiles of people, who have given their permission and are DNA relatives of mine, with me.

I’m still working my way through all the results of my DNA, and perhaps when I understand it a bit better, I may reach out to some of my 3rd to 6th cousins who live in the locations stated to the left!

In my next post I will share a bit about my health overview (traits, genetic risk factors, and inherited conditions).

Have you ever thought about submitting your DNA to find out your ancestry or to look for lost relatives? If not, have I tempted you to do so with this post?

Related article: A Journey Back in Time