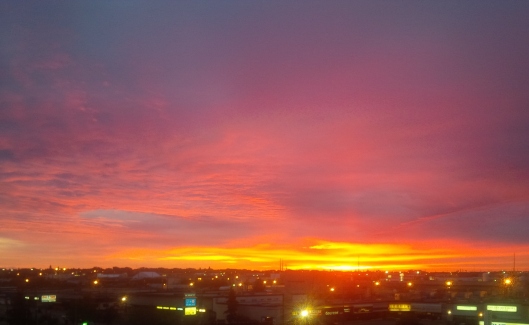 I had arranged to meet my northern colleagues in Edmonton this past Monday, and I’d decided to come early so I could spend some time with my daughter, Michaela and her boyfriend Stephen.

I always get all turned around when I drive to, and try to navigate, another city. I have no sense of direction whatsoever. In fact, it’s a fair bet that if I feel strongly about going one way, I should probably be going the other way!

Luckily, I only had to circle once to get to the Ramada Hotel when I arrived in Edmonton on Saturday afternoon.

The kids met me at the hotel for dinner. Much to my dismay, it was Karaoke night.

I don’t like Karaoke and I’m not very good at hiding my dislike of Karaoke.

Turns out my face gives me away and I just can’t keep my opinions to myself. 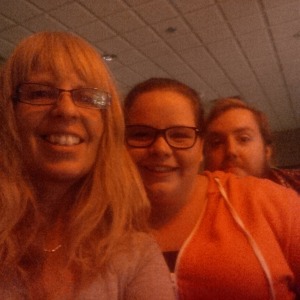 Me, Michaela and Stephen

If loose lips sink ships, I sunk a whole fleet!

I really don’t mean to be disrespectful or rude – honest!

It’s just that Karaoke is the equivalent to fingernails scratching across the black board to me.

Michaela was a tad mortified by my behavior but aside from that, we enjoyed a nice dinner, caught up on all the latest news and met some really cool people!

The next day, I met the kids in their part of town.  We enjoyed a lovely brunch at Smitty’s and afterwards they introduced me to their two Siamese cats Lily and Keetah and their hamster Enchilada…

no that’s not it – Fajita

nope that’s not it either, Burritos – yeah that’s it!

They also brought me to the coolest coffee shop in St. Albert, a small town on the outskirts of Edmonton.

You know…I hear a lot of talk about rivalry between Calgary and Edmonton.

Something to do with hockey, I think; Calgary Flames vs. Edmonton Oilers. Or the Calgary Stampede vs. Klondike Days. Or Edmonton is getting a new arena and now we want one too or something along those lines.

I guess I’ve never really gotten caught up in that whole Calgary/Edmonton rivalry because I’m from Montreal originally, and I know the real important thing is The-Montreal-Canadiens-are-better-than-the-Toronto-Maple-Leafs.

Dinosaur on Calgary Trail in Edmonton

I kinda like Edmonton. It’s not scary at all!

Does your city have a rival city?