THE PC UPSET IS JUST THE THING you wanted to avoid, eh?

In your opinion the PCs and the Wild Rose should have merged because the combined seats that each party won would have added up to a majority government, right?

That’s why you crossed floor, you say…well that’s what you’re saying now.

Back then you fiercely opposed the PCs because they were just plain wrong about almost everything and then rather suddenly, over night it seemed, you could find no fault with the Prentice-led Government and crossed the floor just a few short days after lambasting others for doing that very thing!

Here’s what I think.

To borrow the words of another, “Somebody’s not very good with math” –  and I don’t mean the person the words were originally meant for.

The reason people voted the way they did may have more to do with the following:

Yeah, I think your math is off, Danielle.

I think you crossing the floor was probably the last nail in the PC coffin.

And for that – at least – a lot of us are grateful to you.

Put that in your book. 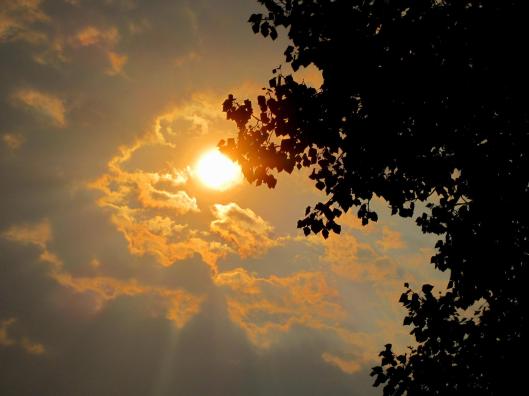 Hundreds of wild fires are burning in BC, Alberta and NWT. I hope everyone stays safe, but I can’t help marvel at the beauty of the sky caused by the haze. Photo by Maureen Young

So I was walking at my usual Soldier-on-a-Mission pace up 17th Avenue, finding myself occasionally stuck behind groups of people taking up the entire width of the sidewalk, and weaving in and out of people as I passed them when I got the chance.

I turned down 4th Street and Bliss.

No one on the sidewalk, except for two men about a block and half away.

The gap between me and them shrank quickly as I continued walking. The closer I got to them, the better I could hear what they were saying.

At one point, the sun suddenly broke through the clouds and haze caused by the smoke from all the wild fires burning everywhere.

One man said to the other, “Whoa! It suddenly got 8 degrees hotter!”

Now you may surmise he said this because of the sudden burst of sunlight, and I can see how you might come to that conclusion.

But just one second earlier, I passed them on their left – they must have seen me and that’s why he said that! 😉

You know…I’m pretty easy-going most days. And I’m kind of proud of the fact that as I’ve matured, I’ve learned to keep my temper in check. But lately, there is one situation that’s just making me angrier by the minute. And today when I read about downtown seeming more dangerous, I lost my shit! But I’ll get to that in a minute.

I love Calgary. Most Calgarians are top shelf.  This city does a lot of things right. In fact, several weeks ago, the Beltline Community Association held a public event at a park on 11th Street SW just off 17th Ave.  They had some ideas on how to rebuild this park and wanted to know what the community thought. Brilliant – I love when Calgary does that!

They had several tables set up with different themes like creating a sports park, or more of a social park, or something that could change with the seasons; an ice rink in the winter, water park for the summer, etc.

I was making the rounds and one table showed a photo with a fire pit. I overheard a well-meaning lady tell the volunteer who was manning the table that she really liked the fire pit but it wouldn’t work; it would attract homeless people.

OK. LET ME BACK UP A BIT. Some of my new readers may not know that I’m somewhat of a champion for the underdog. And for over 20 years I worked at an organization that helped homeless people rise above their circumstances and achieve independence. I just couldn’t let that comment pass.

And so I asked her, “Shouldn’t homeless people have the right to relax and enjoy the beauty of a public park?” She quickly said “I didn’t mean that. It’s just that some people are drunk and belligerent.” “Oh, so it’s more a matter of drunk people behaving badly coming to the park? You are saying that people should be respectful of others in the park? And it’s not about economic status then?” “Yes,” she said. “Oh good, then I agree. People should indeed be respectful of others.”

Then a couple of days ago, my friend Helga and I met downtown at Olympic Plaza. It was a gorgeous sunny day and OP is located at the end of Steven Avenue Mall – a cobble-stoned street that is lined with a bunch of restaurants and retail businesses. After enjoying a nice long chat with a senior we had met, we decided to walk Stephen Avenue.

That’s when Helga showed me the new benches. These benches tilt forward and unless your feet are firmly planted on the ground, you will slide off. They are uncomfortable. They face the buildings instead of the street. They do nothing to make the core more vibrant or inviting. And I know in my heart they are designed to prevent homeless people from sleeping on them. They piss me off!

So I took to twitter. Hey #yyc what’s with the uncomfortable slanted benches facing buildings?

Their response to me was something like: We are testing out these benches to see if it cuts down on bad behaviours blah blah blah. They’re only meant to be sat on for 20 minutes.

Figures. Keep out the Riff Raff. Bully the marginalized. I get it.  I calmed down and let it go…

…that is until I read today’s Metro news.

After years of declining crime rates and improving perceptions of safety, downtown Calgary now appears to be getting more dangerous, according to a core-area city councillor.

Coun. Druh Farrell said Wednesday she’s noticed a “marked” change as of late and has become concerned for her own safety at some downtown LRT stations after regular business hours.

“I don’t feel comfortable taking the train, even at 6 o’clock,” she said. For the rest of the article click here.

It goes on to say that in the latest survey conducted in 2013 people feel safer downtown than they did in 2011. In spite of the fact that 96% of people feel safe riding the LRT during business hours and 72% feel safe after business hours, Farrell has noticed it’s getting worse. “Lots of Listerine is being consumed. It’s quite a state outside City Hall.”

She doesn’t come right out and say that ‘quite a state’ means ‘homeless people’ but it’s implied and she feels something needs to be done. She’s talked to police and bylaw and social agencies and no one is sure why there’s an increase.

If people aren’t nervous about being downtown these days, maybe Ms. Farrell’s fear mongering based on her own personal observations (that are obviously more reliable than actual stats and surveys) will change that perception.

Listen, I agree with one thing, this city does have an issue with homelessness. We all know people live on the streets. But uncomfortable benches and locking up public bathrooms and covering vents that push out warm air in the winter with stupid art so homeless people don’t sleep there is not going to fix it.

Why don’t you employ different tactics? Why don’t you put your money where your mouth is?  Why don’t you make a personal donation to an organization that is trying to give homeless people their dignity back? Why don’t you have an actual conversation with a homeless person? You might find out that they have a story, or they didn’t set out to have an addiction, or that they’re actually human beings.

In a city where there is great outrage when pets are treated inhumanely and investigations are launched to look into these situations so people can be held accountable for their actions, shouldn’t we have at least a portion of that compassion for fellow HUMAN BEINGS???

Yes downtown does seem more dangerous lately, but not for the reasons stated by Farrell. The real threat is ignorance and an absence of kindness, respect, common decency and a sense of duty to our neighbours whether they have a home or not!

I don’t usually post on Thursdays but I just couldn’t wait until Wednesday to share this story with you!

Usually the news breaks my heart.

Then along comes the man with the hat and the sunglasses on and blows my mind! He has enough and is satisfied. His children are taken care of.

The one person he loved above all others is gone. His wife, who died of cancer 2 years ago.

And this man with the hat and sunglasses on wins $40M on his lottery ticket. And declares that he will be giving it to charity; most of it for Cancer research.

He has the secret to happiness. He has enough. Having more doesn’t make you happier when you have what you need. I’m so happy for him!

Tom, I have no doubt that your beloved wife is looking down with pride and love in her heart for you. May your generous act lead to a cure and spare many husbands, wives, parents, children from losing the ones they love.