…on Sunday, I hopped on my bike, knowing that there aren’t that many bike-riding days left until winter hits Calgary, Alberta, Canada.

I planned to do my usual ride to St. Patrick Island, but first I wanted to stop at the alley between 4th and 5th Street.

You see, there’s been construction on 17th Avenue, and I’d be lying if I said I hadn’t cursed about a lot in the last year. But I was intrigued when I heard they were closing the alley to cars and opening it up to foot traffic so that local businesses could create a space in the alley.

A bar set up a grassy area and picnic tables, the pet food place set up booth and an apartment building laid down turf and set up lawn bowling and other games.

The City of Calgary also had an information tent and that’s where I met Kate. Say what you will about Millennials, but I love them! They’re bright, creative and love to build community.

The alley idea is a pilot project, Kate explained. To see if it would work to open up alleys in other blocks as 17th Avenue construction works its way to 14th Street over the next three years.

We got talking about other cool projects like the Red Boardwalk Project on Rue St. Denis in Montreal and the Skyline Park in NYC. And we talked about ways to build community; community that would even welcome homeless people! I asked her if she was afraid of, or uncomfortable around homeless people and she said it depended on the person. But, she had “a very cool story to tell me, something that happened just last night!”

Kate is an urbanite, and like most neighbourhoods in the core, her backyard borders an alley. And over time, she met “Tom.” Tom is homeless and collects recyclables from the alley behind Kate’s home. Kate and Tom chat a lot and she saves her bottles and cans for him.

Well the night before, Tom surprised her with a gift. There’s a street artist named Raven who paints native art and Tom chose, and bought a piece from him for Kate.

I felt my eyes moisten as Kate told me the story, and you can say what you want about Millennials, but I just love them.

On my way to the alley, I heard the thunder of motorcycles. Turns out “The Distinguished Gentlemen” were riding for men’s health. 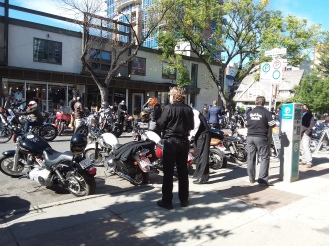 19 thoughts on “Say What You Will About Millennials, But…”